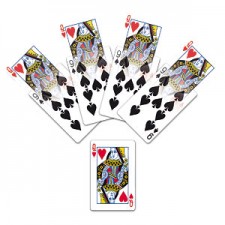 This classic card trick revolves around using several copies of the same two cards: the nine of Spades and the Queen of Hearts. After presenting your audience with four copies of both, you turn them over one by one, slowly transforming them until they're all the same card! A simple trick that is guaranteed to amaze an unsuspecting audience. Includes all cards and instructions needed to pull this trick off!