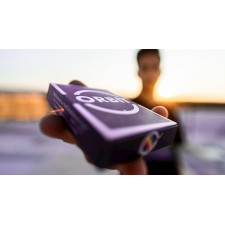 Beschreibung Bewertungen (0) Ähnliche Produkte (6)
Welcome to the seventh edition. Orbits are going 80's. For this edition, the creators sat down and reviewed a lot of 80's art to come to this final design. They missed clean borders and wanted something more minimal than the V6 but still with the element of intricacy within some part of it.
The V7 features a pink dominant center along with the mountain range from the V5 Orbits that are now inverted, so they are a window to what's behind the card rather than the original mountains. Upon close inspection, constellations can be seen in the star belt.The rainbow at the bottom of the box inside the Orbit logo is a direct tribute to the lives lost in the 1986 space shuttle Challenger on their mission STS-51-L.
The last names of the crew can be found on the inside of the V7 tuck because those who gave their lives for space exploration should never be forgotten.
NASA halted missions for 2 years after the tragedy but when they came back, the mission patches had a rainbow in the center to signify life along with 7 orange stars to remember the 7 lives lost. Gregory Jarvis, Christa McAuliffe, Ronald McNair, Ellison Onizuka, Judith Resnik, Michael Smith, and Dick Scobee.
The rainbow was saying that NASA is back and alive but will carry the life of their fallen astronauts. It is a beautiful tribute to the lives lost in 1986. We're doing our part to ensure their legacy lives on.
V7 Facts and Stats: