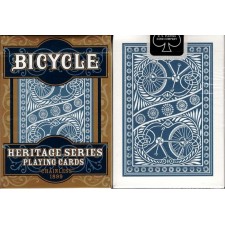 Beschreibung Bewertungen (0) Ähnliche Produkte (3)
Ten years ago the U.S. Playing Card Co. revived four designs of Bicycle cards that had not been printed for at least 80 years. The cards were produced in late 2010 for an American grocery store chain but were never marketed anywhere else. Now available here!
This is 1 version of the vintage Chainless Back. It was originally made from 1899-1917. It has been reprinted in BLUE only.